Body Image. In American Western Society we are hard-pressed to find a term that evokes so much emotion, debate, concern, and confusion. I mean, not a day goes by when we’re not bombarded by confusing pictures and messages and social media can be a mine field all its own. Running in particular has its own set of false standards and issues with eating disorders and body image disturbance. Pair the darker, more archaic archetypes of competitive running with the modern conveniences of technology to display images and ideas at anytime to anyone, there are bound to be issues sometimes.

Amidst the chaos, however, some recent constructive dialogue has taken place among many in the running community, most recently I was inspired by an article on RunHaven and a LetsRun thread (yes you read that correctly) to publish this. I have actually had this written out for a few weeks, with the first impetus a private Facebook  group message thread on how to be sensitive when posting about body image issues and basically how to “talk about physical things with low risk of triggering others still feeling somewhat free to speak”. As poorly structured as that last sentence is, there is the essence of this post.  On the aforementioned thread, what began as a “please be supportively aware of those with body image issues and eating disorders ” turned into “then what am I supposed to say without offending or triggering someone”, which turned into the idea of posting the idea of “trigger warning” before anything on clothing sizing and fit to nutrition to race times.

Despite some of the confused statements mentioned above, overall as a professional in the counseling field I was impressed with how this discussion that lasted hundreds of comments and hours did not turn into a total firestorm. That alone I see as progress.

In this highly imperfect post, I hope to clarify and hopefully help put some proverbial guard rails up when it comes to what to and not talk about that may affect those struggling. I will also say that everyone is different and below addresses some common things that are bothersome, they may or may not apply to everyone’s situation.

So where did all this distortion in running come from anyway? There seems to be this metaphorical ‘ideal’ runner who never goes above 8% body fat, is 5’9 or above with highly visible veins and muscle striations and never gets injured. If this is true, I bet this covers less than 2% of all runners and is highly tied to genetics.

The (often unarticulated) idea that superior athletes are lighter and thinner, often much below average is what seems to get internalized by often unsuspecting runners. About a decade ago when I fell into this ideology, it was a very slow and subtle process, when I realized what was happening after listening to various comments about weight and times, consequences of injury and hearing runners compare bodies-even if unintentional-on a daily basis, I was in the grips of chronic injuries by maintaining a body weight that was not designed for me to be at.

Clearly this is an issue that I am very passionate about both as a clinician and a runner. Luckily, many women are fighting back against this false idea and my sponsor Oiselle has even gone as far as including honoring one’s body as part of its Manifesto (or see Lauren Fleshman’s version of that principle below). 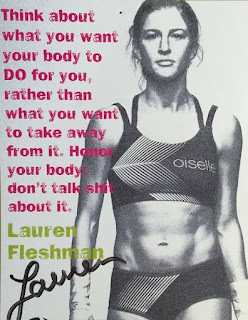 In my work with female athletes plus my own experience, one of the biggest gray areas in combating body image is how to deal in the face of something that flips that ‘irrational switch’ of a body image trigger in your brain. But what if that switch wasn’t even there in the first place? In a perfect world, we could just make all the garbage we see on the internet and the images that make us feel bad about ourselves just disappear. We can’t do that, but shifting gears a bit- here are some simple things we be aware of and consider in everyday thought and conversation that just may soften the negative body image blow….

1.       The compliments we give people that really are backhanded towards ourselves. When we tell our running partner that “I want/if only I had your abs/legs, etc.” we are really telling ourselves that what we have is not good enough. Think about it. Wanna still tell someone they look fit and stuff? Simply cut off the wanting part and say “I like your abs/legs/feet/blazing speed, etc”. Still gets the message across without you inadvertently putting yourself down while doing so.

2.       When it comes to being out of shape or dealing with injury, I’ve noticed in a lot of conversations how we disregard that it is actually normal and advised to not be in peak shape all of the time. Deconditioning is generally part of the healing and recovery process and should just be looked at as just a normal, albeit inconvenient phase instead of making it fair game for the injured party to put those in different training phases or not currently injured on an unfairly higher plane. Why? Guess what, you start training again, you generally go back to where you were or better. It may not be ideal, but think about it and pay attention to the comments you make about yourself during times like these. One of the most negatively impactful comments for me during my rough period was “when you’re injured you gain weight” from a fellow racing weight-conscious runner. That may fly over another runner’s head, but for some, it can be internalized and magnified, especially when you’re hurt. Frustrated that you’re sidelined? Talk away to your good friends and those who support you, just be mindful and maybe keep it injured-part specific.

3.       Speaking of ‘racing weight’. Okay, I get it-the whole “power to weight” thing. Lighter is usually faster, so you want to compete, just reduce your body weight. This is just fine if you are a race car that runs on gasoline and not hormones. If you are not made of metal and fiberglass, it gets a little more complicated than that. My argument is there’s more to it than that and when another runner refers to themselves (in any tense) as ‘fat’, be on your guard, because the notion fat to a runner and the average individual is quite different. If you do pay attention to the scale in peak season, I ask you to do it sensibly and not use it as a tool to judge yourself. Too often a perfectly fit teammate may say “I need to lose 5 pounds” and think nothing of it, but for someone with an eating disorder or body image issues (so often we DON’T know of suspect) this can send a cascade of negative thoughts.

4.       Fretting about the ‘calories in-calories out’ equation. A few years back, I was at this charming little bistro having brunch with a couple girlfriends, also runners and darn good ones. The mood was light and we were simply enjoying each other’s company browsing the menu when one pipes in “I wish I could order ______, but I only ran 8 miles today”. I’ll admit, I took an unnecessary second look at the menu after hearing that because I too, only ran 8 miles. This is just my opinion, but these things that are all too common in conversation, can make having meals with our friends more stressful than necessary. What would happen if we just cut that out of our talk at the table? I would guess we would fuel our bodies the way we see fit and enjoy hanging out with each other.

So there we have it. These are the four themes in runner conversation that tends to tip into territory that it doesn’t need to be in. In no way am I proposing we have to censor ourselves unnecessarily to where we are dodging the proverbial ‘white elephant’, but these are some things that are very real and tend to lead some down into the unfortunate dark areas that our sport that we can start eliminating simply by redirecting our conversation to make this amazing community any stronger. Take this information however you like, and I am more than open to feedback on this topic.

If you or someone you know may be struggling with significant body image concern or an eating disorder, don’t try and go through it alone. Speak up, gather support, and if necessary, seek professional help. Don’t know where to start? The National Eating Disorder Association (NEDA) is a great resource at www.nationaleatingdisorders.org. Just think, if we start putting these small things into practice and learn together, what could women’s running look like in the future? Just the thought of it makes me smile. Keep it real, keep it positive!
Head Up Wings Out,
Adrienne

Adrienne, as always, another insightful and thoughtful post from you. As someone who used to suffer from anorexia/orthorexia, this post resonates with me. I really love the point you make about being injured or not being in peak shape is actually normal. Nearly all runners get injuries. No one is in peak shape all the time. It can be hard to remember this when you are injured and not at your best, but looking at the big picture is key. I didn't read the threads you mentioned, but I have seen conversations like that in the past. I don't think people should censor themselves, but rather post with responsibility-- the responsibility that other people will be reading this and take a moment to think about how your words will impact someone else.

Thank you, Elizabeth! After dealing with so much a few years ago-I would hate to have others have to go down a similar path unnecessarily. Once I started 'eating to train' versus the opposite, I started staying healthier longer, and subsequently improving. We learn so much from one another in this sport and role models are very accessible, it's important to at least be aware of what comes out of our mouths and what we allow to pass into our brain.

The reason the chicken crossed the road said...

Nailed it. I wish I had these exact tools when working with my girls on the team. I could react properly to the negative self speak but couldn't head it off or divert.