Yesterday I returned from an amazing and running-filled trip to Colorado. For eight days I ran, hiked, gawked at the natural beauty of the state, put a ton of miles on the rental car, gawked some more, and took in the local culture of Boulder and the surrounding areas. I have wanted to try my hand at running at altitude for a while now, and with work doing well but not crazy enough for me to get away for a little bit, I took advantage. I put in a little over 50 miles while I was there and loved the challenge and beauty of it all.

Runs ranged from 5400ish-8600 ft. above sea level. I had done a couple runs on a ski trip this winter and survived those, so I had some frame of reference for how it felt. What I found surprising was the range of difficulty was at different paces and inclines. In Boulder, I was lacking 7% my usual oxygen availability in Texas, and running my typical easy pace actually felt considerably easier than back home, a lot of that had to do with the dry climate at higher elevations. After nailing my first moderately-paced run at the Boulder Resivoir, I giddily texted my coach "OMG I love it here!". Running at paces 6:30 or faster or climbing the rolling hills was another story. I was challenged both cardiovascularly and mentally on those runs; vs. in more humid climates, these more 'hurt so good' than the overheating feeling I have been struggling with this summer.

Every run was different by design and instead of throwing down my usual post-novel, I thought I'd summarize a little more with pictures. I had a list of trails and places to run before leaving, and
my good friend Justin B. over at aboutarunner.com agreed to housing me at his place in Westminster, a Denver suburb just about 20 mins outside of Boulder.

I had my training schedule with me giving the daily miles and each day I picked a destination and went after it...

Day 1 was a rest day where I simply drove around in my nicer-than-expected rented Nissan Altima and got a feel for things. And looked at pretty scenery. Lots of it.

Day 2 was Justin's race day at the Boulder Peaks Triathlon, an Olympic Distance. He and his fellow competitors did work on a tough course that included a 15% extended climb through Gunbarrel and a basically shadeless run afterward. Me? Once J. was outta the water I headed out to a adjacent dirt road with some hills that the CU team and a number or triathletes train on regularly. I also did a fartlek run there running 6:30 pace as best I could off and on on Tuesday. That was the first run where I could feel my lack of acclimation to the altitude. But gotta give it your best to get stronger! Day 3 was just an easy 6ish in Westminster with the baby bunnies and prarie dogs. 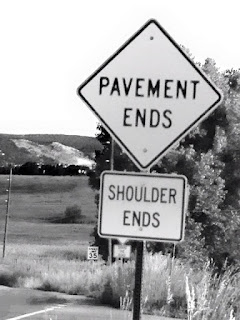 Run # 2 on Tuesday/Day 4 I just put in a handful of easy miles on the Doudy Draw trail that was recommended to me by locals. Just awesome. 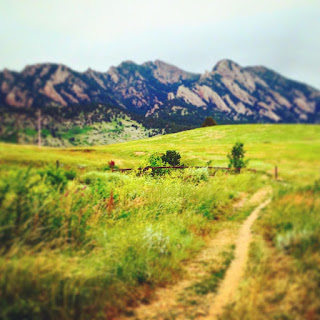 Day , 5, Wednesday, was pretty epic. I hooked up with Colorado local and one of my favorite run bloggers, Jill, how knows how to pick a heckuva trail. We ran along a ridge line in the Golden/Morrison area and finished up on the Red Rocks Trail, right by the ampitheater. 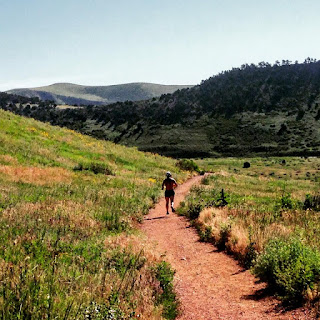 Day 6 was Mags day. Magnolia Rd., it's proper name, is known for it's awesome views and unrelenting rolling terrain at 8600 feet. This was an experience for the Texan. the first 4.5 miles I did not attempt because it climbs so steep the 240 horsepower car I was driving seemed to have some difficulty getting up in spots....maybe later, but not this trip! As I had been told, once you get to where the pavement ends, the fun begins. The difficulty was another level up there. I absolutely flew in some spots; running as fast as 5:20 pace or so on some downhills and the small flat areas were very smooth, but the way up on the hills there....OMG! I both felt on top of the world (well, I sort of was on top of Boulder) and demoralized in the same 5-mile run. I was prescribed 7:30-8:30 pace that day, and I somehow squeaked in a 7:59 pace. Thank you downhills. Lesson of the day: Even pace does not equal even effort.


Day 7 was my last running day there and I went ahead and did my long run to avoid rushing in order to get to the airport on time. I ended up splitting it up into 10 along Boulder Creek Path that runs straight through the eclectic Boulder downtown and CU and finished up with 5 more in the afternoon in some neighborhoods with more bunnies with Justin. It was on the path where I saw a 'who's who' of distance running. Several Sketchers team members were out, a handful of Japanese elites flew past halfway through the 10, and a pack of CU Buffalo men were walking to do a workout near Potts Field on campus. This was another run where I could feel the lack of oxygen, but managed to stay on pace, my Honey Stinger gels were very helpful in my heightened metabolic/catabolic state. After that one, I lost count of how many ounces of Gatorade I consumed . I could not get enough of it! Clearly, while I didn't get as offensively soaking wet, I still sweated a ton out there.

The trip wasn't all running. I had a lot of time to hang out in Downtown Boulder and get my fill of the local coffee shops and breweries, with my favorites being The Cup and Avery Brewing Co. After the Red Rocks Trail run, I headed to Estes Park for the day and took in some ridiculous Rocky Mountain scenery. My last evening was spent in downtown Golden, a very cute town with an old west feel to it. Being a pretty independent and introverted girl by nature, I found having the keys to a car and time to just drive around the state a great vacation seeing new and different things.


So 50 plus run miles later, I'm back in The Woodlands with a busy but exciting week ahead at the practice (that I started to miss a little when I was gone), a perfectly-timed cutback week of running, a more refreshed outlook and hopefully a little stronger from the rugged challenges of last week. I see what all the fuss is about with running at altitude, and I hope to go back up there sooner than later, as there are many other places I didn't have time to explore in a week.

In the meantime, I have a couple small races next month to prep for, and I guess I need to pick some Fall/Winter events soon!

"Where the blacktop ends and the road begins ..." ~ line from a famous George Strait song is what was conjured up regarding your post about Magnolia Road.

That's funny, Jon, I had that song in my head for the first half of my run on that road! Gotta love 90s country!

Jon, LOL!!!! Awesome pics. I'm glad you had a super time. I have to know; where do we stand on the altitude vs. humidity thing?

Altitude< humidity. You get gassed running hard or uphill, then you get your breath back fast. And your sweat evaporates!! I had dry spots on my clothes lol

It's so crazy sometimes to think sometimes how the running unites people in different ways. We've been blog friends for what, 4 years now? And finally we met and we chat like we've KNOWN each other for reals for 4 years. It was awesome!

I'm so glad you got a little RnR thrown into your busy running time in CO...it's just such an amazing place.

Looking forward to seeing your new adventures unfold :). Thanks again for the fun morning (and sorry I got us lost a trillion times - opps)!!!

And I really do know grammar and how to write....got sidetracked by something and came back to comment and realized I wrote like a kindergartner. Ha. But hey, my phone's back to working again so text anytime just to say hi!! :)

Great reportage! I'm jealous! I need a vacation like that! That's a great trip report, I needed that, thanks! :)

What a wonderful running vacation!!!