Legendary Coach Dr. Joe Vigil once stated along the lines that the most important asset a distance runner can have is "ongoing commitment to improvement". When I heard this at a seminar last year, I really liked it and find it is a refreshing perspective for me to apply to my running.

Yesterday I raced XTERRA Series' Gator Bait 5k at Hunstville State Park;  my second race for the month of June and I must say, the type of race and surface was only a minor differentiating factor. 6/6's Heights 5k and yesterday's race could not have felt any different, and that is because even though they were just separated by 2 weeks or so, I felt like two different runners in each. Even though today's conditions were comparable or even worse than before (think 80 + degrees at the start and humidity you could actually see), I was better prepared and able to meet the demands of the day and I was able to both have some fun in a painful sense and tap into that sense of toughness that I take pride in as an athlete.

Besides having a plan to just run hard and shoot for Top 3, a big reason I had a better experience today vs. earlier on a much easier course is obvious to me but not to the audience because I was hiding and fighting a case of greater troncanteric bursitis in my right hip. No wonder it had been sore and I had limited mobility for the greater part of a month! Of course I raced Heights with it, because I could, but was far from being able to really jump in and get after it-hip health and strength is really important, and it makes running easier and often more enjoyable!

Shortly after that race, I got tired of thinking about my hip and workouts taking much more energy than necessary and I finally went to Dr. Keith Johnson at Sterling Ridge Sports Medicine. Within 15 minutes of my appt, I was able to have a diagnosis of the problem and my very first cortisone shot. Believe it or not it was not nearly as painful or scary as I thought-and I am not a fan of needles.

Please note that while getting an injection can patch you up, the root cause of the issue needs to be addressed as well. I am also getting some PT sessions in because bursa inflammation there is usually related to IT band tightness, which is related to weak hip girdle and core muscles. Two days later I hit up the golf course nearby and was utterly shocked at how fast my turnover and mechanics came back and running 6;30 pace no longer felt like a monumental task.

So several daily exercises and form drills and another chiro session with Athletic Republic's Derrick Raymer later we're back to the current race....

Gear-wise, I am happy to say no shoes came off in this race! I wore my Nike Zoom Wildhorse 2's and they performed fantastically on Huntsville State park's hard packed dirt, roots, and 1000 or so turns on the course. I decided to not wear the Oiselle Singlet and instead sported a Tracktion sports bra and my Distance/"Feather" shorts on the trail because of the oppressive conditions. There was also a 15k this morning as well, seriously, those folks are tough!

The combination of a light trail shoe with a nice little adrenaline surge and my rediscovered mobility made for a probably too-fast first mile that I don't really regret, however. I always like to race the familiar trails at HSP aggressively and today was no different. The 5k and 15k split off approx. a mile down the course which included some obnoxiously long (although not terribly steep) hill. Ugh. Whatever. According to my watch, I hit the turnoff at 6:32....I don't know if it was exactly one mile, but the front group I went with was going awfully fast...whoops:)

This is where it became less of a straight shot and much more challenging. With one girl a few seconds ahead, we headed out on a nature trail with countless turns and throw in some dirt stairs, aka tree roots on an incline and I did my best to just stay focused on staying above the ground and keeping pressure on the leader. I had no idea of pacing at this point and didn't really care. As taxing as the course was in SE Texas summertime, I was enjoying the experience of running pain-free and being back up front-even if the race wasn't a very big one. I did look back a few times to do some "chick checks" to make sure I could maintain the rhythm I was on and there was nobody in sight. Nice! Keep pushing.

The last few minutes of the race the course and my effort caught up to me and breathing was not an easy thing. Fortunately, the finishing stretch came basically out of nowhere after some more hairpin-like turns in the woods and then it was just about two mini-hills and a straight shot to the now-visible finish chute that I was more than happy to see. What I like to do to manage the fatigue is to lock my eyes upon the word 'Finish' as I make the final push. Unfortunately, I didn't have enough to run down the winner, but came in a convincing second overall female and 1st AG.

After it taking me a minute or two to gather myself again, the gassed feeling was met with satisfaction and a little relief that I had ran tough and fairly aggressively for the first time in a while; largely because I was physically capable of doing so. Sport Psychologist Dr. Jim Loehr once wrote that in order to be able to tap into your mental toughness, you need to have a sound body (i.e. no injuries, hydration, fuel, rest, etc.) and I think he is absolutely right.

I ran probably the slowest 20-minute cool down ever and was able to visit with some people I haven't seen in a while before awards. For a small race, there were a few really strong runners out there yesterday! XTERRA and Terra Firma Racing put on a pretty good race. I have done a number of trail events and this one had by far the best marked course of them all-bright arrows were placed at every turn and it was near-impossible to get lost. The race staff was also very friendly and laid-back. Depending on timing and location, I'd be likely to run another race put on by them.

In closing, I feel I ran a good effort and achieved what I went out to do on a well-marked, fairly well-organized race. . I may just have gained a little more confidence from this event as well as well as having some hot, tiring fun running through nature. As the opening quote reads, what I really want from racing is improvement from where I am/was, and I definitely saw some For the rest of the summer, I plan on stepping back on the racing and continuing laying down a solid base for when the Fall and Winter season hits. I am starting to form some longer term goals that will be more fully articulated as the months progress. 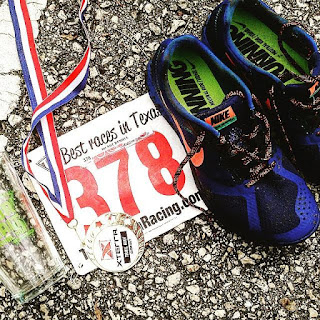 I would also like to thank Sterling Ridge Sports Medicine and Dr. Derrick for getting me back physically where I belong and my lovely sponsors Oiselle and Honey Stinger.

Nice race, lady! I'm glad you got to have some redemption from the last one. Those trails are awesome- challenging, but fair. I need to get back into trail running.

It was so great to meet you Adrienne and so glad your shoes stayed on and that it was a good race for you:) Glad to hear you are taking care of you. My medical massage therapist is a must to keep running. I've done three trail runs this year and this was my favorite as the trails were in great condition and not too muddy. Hope our trails cross again in the future! -Lee Ann

Yea for shoes that stay on :-)