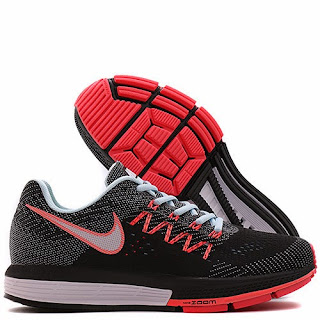 Let's begin with the fact that I used to hate Nike, Ok, I said it, and it was mostly personal and arbitrary reasons that I will keep off of this blog for now....or probably forever. Anyhow, I digress.... I have a review to write and it's been a while since I've done one of these.


I'll begin with a little background on how I decided to take these kicks on- I went into the Nike Factory Outlet a couple months ago out of boredom and tried a few different pairs on. I had been running mostly in the Adidas Boost line and enjoying them, however, a creeping hip pain  and my latest gait analysis in the Energy Boost 2 indicated my stride had changed, and I looked sloppier wearing Adidas' daily trainer compared to a more traditionally soled shoe. Perhaps the rebound from the TPU midsole became a bit much?  For a Type-A person like me, this left me puzzled and call it vanity, but I've always liked my running form and don't like to see it start falling apart. Although no hard feelings are harbored toward Adidas-what works for one may not work for another.

So back to the Nike experiment: I found a pair of Zoom Elite 7's and thought "these are kinda weird, I think I'll try them on". Long story short, I left the store with them, and really enjoyed the Zoom cushion in the forefoot. That's right, the forefoot, not the heel. When I'm running my best, I tend to be a mid to forefoot striker and I developed a hypothesis after my infamous string of stress injuries that the cushioning may be in the wrong spot for me to be really effective; what I really may benefit from is more up front, since I spend most of my time there anyway. I may be proven wrong, but whatever. While the snappy Elite is a fine shoe, I was looking for a little something that may be more suitable for longer stuff (the Elite is mostly promoted as a tempo trainer vs a mileage soaker) so cue the Vomero 10. *Note that these shoes were a personal purchase. Now, let's begin with some stats and stuff-

Weight: 8.8 oz
Heel to Toe drop: 12mm.
Upper: FlyMesh, an adaptive and fairly attractive lightweight material recently introduced in Nike's lineup along with Nike's FlyWire technology reducing weight and creating some midfoot structure and stability to the shoe and ride.
Midsole: This is where it gets interesting, it uses both Lunarlon and Cushlon materials-with the former in the forefoot and the latter more towards the back of the shoe.
Cushioning:  Nike's Zoom Air Units- What makes the Vomero unique from the Pegasus and the Elite is that it uses the best of both worlds: the Air Peg's have a Zoom unit in the heel, and the Zoom Elite has a Zoom Unit in the forefoot. The Vomero has both (which probably explains the higher price tag compared to the others). Zoom Air is nothing new, but designed to reduce vibration and give the athlete a responsive ride and cushion impact, especially on asphalt or concrete.
Sole: Duralon rubber with a lateral "crash rail" that is supposed to enable a smoother heel to toe transition. Translated: for neutral runners, this enables us to transfer our supinated strides through the gait cycle with a little more cushion and control. The 10 has no sign of any plastic shanks underneath, like in the 9th edition, and continues the trend of full ground contact.
Sticker Price: $140

Feel: I've put close to 50 miles so far with distances varying from 4-11ish miles in them. The first day I wore them I was taken aback with how comfortable they are just to stand around in. Day one I wore them to the gym to get used to them, and the next day I had a 5-miler that I ran on asphalt. I'll be honest, It took a few miles to get used to having Zoom units up front and in back, but after a couple miles, my stride smoothed out nicely and I was able to stand up straight and just run naturally. I did notice shoe felt a little tamer underneath after a little bit of a break-in period. Oddly enough, with all the cushion underfoot, I found the ride to not be too terribly marshmallowy as I thought they'd be, but that's not a bad thing, as minimal time contacting the ground is what is ideal anyhow.

Upper & Fit: I love is the Flymesh/Flywire upper combo in terms of fit. I have a fairly weird foot shape-shallow and kinda bony and narrow. What I love about the Flywire is that it immediately wraps around my foot and doesnt let go. Versus the Adidas; midfoot cage, the flywire is barely noticeable but seems to do the job well. People describe a "glove like fit" and for me this model is no exception. These shoes do run a bit narrow in the midfoot, but has a wide toebox; making toe splay a snap and great for those with "diamond shaped feet" (narrow heel and midfoot, longer middle toes and wider forefoot). The shoe is not necessarily low-volume, and it can probably accommodate a number of neutral types and stride patterns.

Cushioning:  I run on soft surfaces most days per week, but would like a shoe where I don't have to think twice about hitting the pavement. Nike did a great job with putting a LOT of cushion in a shoe that is fairly lightweight for it's class. The combination of Lunarlon and Zoom Air creates a responsive, fairly energetic ride; not overly mushy. I like to feel "on top" of the shoe when I run instead of feeling like I'm sinking into every footstrike and this shoe nails it.  While it is far from being a "fast shoe" in my opinion, it has a nice little pop from the toe off which is kinda fun. So far I have taken these out on granite trails, concrete paths, and asphalt. Given that where I live there is a ton of concrete paths I am often hesitant to run on, I have so far experienced little to no grief after running across them in the Vomero.

Sole & Stuff: The sole of the Vomero is interesting. The forefoot has a fair amount or blown rubber with flex grooves around the toes and midfoot area, while cushion is great, it's almost pointless without flexibility. The crash rail extends all around the rear foot and I am assuming it's to match a number or gait patterns-or for marketing purposes. Traction feels pretty decent in them, even on damp roads. I am not sure about long-term durability, but so far the only wear I see is right in the middle of the forefoot (see below).  One thing I would chance in these if I could would be lowering the heel-toe drop a millimeter or two. While not a deal-breaker, these shoes could feel more magical if it encouraged a more natural stride in its cushioned and custom-feeling package.


Arch support? For a neutral trainer, it's pretty good. I've had no shin pain so far running in the Vomero. I imagine that runners with medium to high arches will enjoy this shoe the most. I also haven't run into any blisters or hotspot issues, even running sockless in them-which is fairly comfortable in these.

Negatives: This is an attractive shoe-the Flymesh is on point when it comes to style, however, the drainage factor is pretty low. For being a relatively small female, I pump out sweat like the best of em, and at the end of a 10-miler you can hear the sweat collect in the shoe with every step, Embarrassing? Nah, but they do get heavy. I live in Southeast Texas where the humidity is off the charts, so those in other regions or with different swear rates will probably not have this issue.

While expected since the shoe is so cushioned, there is little to no ground feel and while the ride is super-smooth, there's not much road feel at all.
As far as flexibility is concerned, the midfoot groove works magnificently with my stride, but it seems to lose some up front. It's not necessarily bothersome, just noticeable and probably related to the forefoot zoom unit. I don't notice me having to adjust my stride or anything for it and I like a little stiffness in my shoes.


The Bottom Line: The Zoom Vomero 10 is a very nice-looking, responsive, and well-cushioned shoe that does well what is was made to do. It uses some fancy technologies without being over-the-top and likely would suit many a neutral runner looking for a good long and easy run shoe. This shoe shines on long runs-I normally have that "trashed" feeling in my legs of varying degrees after longer sessions, but have barely noticed anything wearing these. I have enjoyed running in these so far and hope to put a good few hundred miles on them before replacing, likely with another pair of these.

I'd recommend this shoe to a number of different runners, it seems to be forgiving and adaptive enough to handle a number of body types, competitive levels, and even paces. This is a great option for those like myself who require a little more cushion but don't want to feel like they're running on pudding. And the occasional compliment about how cool they look is always nice too:)

Nike, I was wrong about you on a couple levels and I'm sorry-you do make a nice shoe that I seem to get along with easily.