The Boston Marathon was Monday morning. No other sporting event carries the magnitude as that race does with me. Maybe because I've sat on a curb in Brookline at Mile 23 and was one of the first to know that the course record was broken that day. Maybe because one side of my family originates from that amazing city. Maybe because it's a large sporting event that I am capable of participating in. Whatever it is, Patriots Day admittedly does some weird things to my emotions: every year I get that familiar combination of excitement for friends and teammates running combined with restlessness and some level of disappointment in the fact that I am not there. Fortunately this year brought less negative feelings than previous ones-hey, I just may be making progress here!


My friends and teammates threw down some impressive performances in conditions that were threatening rain and had a nice little headwind heading towards Copley Square. If you haven't had the pleasure of racing into a headwind, lucky you-as they tend to suck. I smile when I think of those who have made comebacks, hit a milestone for the first time, or just got through the training it takes to run a marathon-you all are awesome!


So my relationship with this race tends to be complicated. Like I said, I have the ability, motivation, and on most days the mental toughness it takes to qualify for and finish the race. I have mostly sworn off the 26.2 distance because of difficulty training for it and the fact that I do believe shorter races are nothing to scoff at if ran to one's true ability.

How do I see things? Well, let's begin with an over-dramatized and perhaps overrated early 2000's action film "Gone in 60 Seconds". Any of y'all remember that one? Nic Cage's character could steal basically any car successfully, except one; and it wasn't even the most exotic one featured in the film, "Eleanor" the Shelby Mustang. They called it his 'Unicorn'-the one thing that he was after that eluded him, as obtainable as it was-I mean, he was like a professional car thief and stole cars all the time. Note: Just so you know I have no intentions of stealing any cars at the time of this post....

For those of different generations, how about a more current example. I first have to confess to occasionally reading Nicholas Sparks books (even though I don't really have a romantic bone in my body). Ok I said it, now let's move on..."The Longest Ride", now a movie as well, features some ridiculously good-looking cowboy who is making a bull-riding comeback after his career and life nearly being ended by a bull named 'Big Ugly Critter". Not to give too much away, but he can't seem to fully move on until he successfully rides this bull. He is able to, but afraid and it is a big risk doing so. And there is some love story in the background, but not the purpose of this post!

So what's stealing cars and riding bulls have to do with running? Not much, really, except Boston seems to be my unicorn or Big Ugly Critter. Unlike the movies, of course, my life goes on successfully even without ever making it out Northeast to race, but dang it-part of me wants to find a way to go after it. 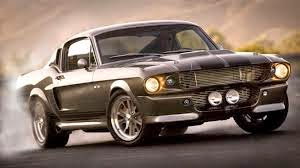 And in case you haven't seen either of these movies, of course Nic Cage drives the Mustang away and cowboy Luke finally rides Big Ugly Critter. Adrienne has a way to go and goals to hit before giving herself permission for even seriously entertaining training for the marathon again, but wow, does the third Monday in April do some weird things to me.

First step, finish out my 12-month goal or longer. Congratulations goes out to all who raced and finished in this year's event!

I totally get this post. For years, I wanted so badly to be happy and excited for my friends, and yet this overwhelming sense of sadness and bitterness would overcome me. Like you, I knew I had the ability to qualify for and run the race, but it just never worked out that way. Good to know I am not alone in these mixed feelings about a sporting event! Anyway, it seems like you've progressed mentally and are able to see the race at face value.

I really understand Boston being a Unicorn. Way back in the late 60's I told my grandfather that someday I would qualify and run Boston. He scoffed at me that and since that day running Boston has been "one of those things".

I am not crazy about the marathon, in fact I don't really like very much about them, but it is still stuck in my craw and something I need to try going for one more time.

Unfortunately, my body is not/has not held up to the training needed despite several attempts or back in 1983 in a moment of distraction I step wrong in a pothole and crash/burn the rest of the course despite hitting 20 in 2:15:**.

So like most runners I have the talent/determination and motivation, but age and injuries have taken their toll with the distances I can do.

At 58 I have decided for one last try. It will take me 2-3 actual marathons to BQ. One to train for just finishing, I need to take all the pressure off in training to run a certain pace and get to the finish line and finish the damn thing, the next to go for a BQ and then if don't make that one more time.

At that point 3 strikes and I am done with the marathon and going for a BQ, seems to be the correct answer. Then I will go back to my love - the 5K and have fun running hard and fast for an old fart :-).

So I get your Unicorn.

I get this, too. The marathon and I have pretty much developed a hate/hate relationship. And I've run boston twice, don't' really care if I ever go back again. And yet I always get a little pang come that Monday in April when I've chosen not to go. I will go 2017 with my friends as we've decided that it's a five year thing for us, so perhaps we'll both be there?

That would be sweet! I'm thinking 17 is a safe window to decide to commit to the process or not. That or I ma just play groupie:)